The AFCEA Quantico-Potomac chapter hosted the 6th Annual USMC IT Day  on Tuesday, April 28, 2015.  This year’s theme focusesd on the emerging requirements to tie aviation and ground expeditionary forces into a common data environment to permit en-route mission planning as well as integration of ground and aviation forces into a common data environment.  Speakers included a broad array of stakeholders from Aviation, C4, and Marine Corps Systems Command along with a panel of warfighters supporting the tip of the spear. 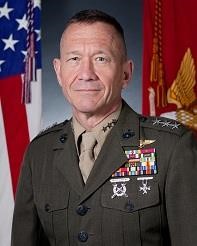 Commissioned in May 1980 through the PLC Program, LtGen Davis completed the Basic School in August 1980, and then reported for flight training. Upon receiving his wings in September of 1982, he was selected to fly the AV-8A Harrier.

He reported to VMAT-203 in October 1982, completed Harrier training and reported to VMA-231 in 1983 where he deployed aboard the USS Inchon. In 1985 he transferred to VMAT-203 serving as an instructor pilot. In 1986 he attended the WTI course at MAWTS-1. In 1987 he transferred to VMA-223 serving as the “Bulldogs” WTI and operations officer. From 1988 to 1991 he served as an exchange officer with the Royal Air Force. After training in the United Kingdom, he deployed to Gutersloh, Germany for duty as a GR-5/7 attack pilot with 3(F) squadron.  From 1991 to 1994 he served as an instructor at MAWTS-1 in Yuma, AZ. From 1998 to 2000 he commanded VMA-223. During his tour, VMA-223 won the CNO Safety Award and the Sanderson Trophy two years in a row, and exceeded 40,000 hours of mishap free operations. After completing the Executive Helicopter Familiarization Course at HT-18 in Pensacola in 2003, he was assigned to MAWTS-1 where he served as Executive Officer and from 2004 to 2006 as Commanding Officer. From 2006 to 2008 he served as the Deputy Commander Joint Functional Component Command — Network Warfare at Fort Meade, Maryland. He commanded the 2nd Marine Aircraft Wing from July 2010 to May 2012. From May 2012 to June 2014, he served as the Deputy Commander, United States Cyber Command

His staff billets include a two year tour as a member of the 31st Commandant’s Staff Group, and two years as the Junior Military Assistant to the Deputy Secretary of Defense. In 2003, he served as an Assistant Operations Officer on the 3rd Marine Air Wing staff in Kuwait during Operation Iraqi Freedom. In 2004, he served in Iraq as the Officer in Charge of the 3d Marine Aircraft Red Team. He served as the Deputy Assistant Commandant for Aviation from 2008 to 2010. In the course of his career he has flown over 4,500 mishap free hours in the AV-8, F-5 and FA-18 and as a co-pilot in every type model series tilt-rotor, rotary winged and air refueler aircraft in the USMC inventory.

LtGen Davis graduated with honors from The Basic School and was a Distinguished Graduate of the Marine Corps Command and Staff College. He is a graduate of the Tactical Air Control Party Course, Amphibious Warfare School, Marine Aviation Weapons and Tactics Instructor Course (WTI), The School of Advanced Warfighting (SAW), and Johns Hopkins School of Advanced International Studies (SAIS). He holds a Bachelors of Science from Allegheny College, a Masters of Science from Marine Corps University and a Masters of International Public Policy from Johns Hopkins.