On Thursday, Jul 27, 2017, AFCEA Quantico-Potomac will host a luncheon at The Clubs at Quantico. The Guest Speaker will be Col Brock McDaniel who is the Portfolio Manager, Command Element Systems, Marine Corps Systems Command. 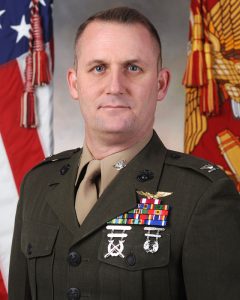 Col McDaniel, a native of Union City, California, was commissioned in Mar 1992 through the Platoon Leaders Class program after graduating from California State University of Hayward, where he earned a Bachelor of Arts degree in History.  Upon graduation from The Basic School in Sept 1992, he proceeded to Naval Air Station Pensacola, Florida for Naval Aviation training.

Following flight training Col McDaniel was designated as a Naval Flight Officer in Jan 1995 and was assigned to Whidbey Island, Washington for Fleet Replacement Training in the EA-6B Prowler.  After graduation, he reported to VMAQ-2 in Cherry Point, North Carolina and subsequently deployed in support of Operation Joint Endeavor.  In Sept 1997 he again deployed with VMAQ-2 in support of Operation Deliberate Guard, where he served as the NATOPS Officer and was selected to serve as the squadron representative at the Combined Air Operations Center.  During 1998 Col McDaniel was assigned as a Mission Commander and also completed the Aviation Safety Officers Course.  In Feb 1999 he deployed a third time with VMAQ-2 in support of Operation Allied Force (OAF) where he served as the Aviation Safety Officer and later was selected to serve in a Department Head billet as the Director of Safety and Standardization.  Col McDaniel flew 30 OAF combat missions, 17 of which were as a Mission Commander.  In 2000, he was selected to attend the Naval Post Graduate School (NPS) in Monterey, California, as a student in the Systems Acquisition Management curriculum.

Col McDaniel graduated from NPS in March 2002, earning a Master of Science degree in Acquisition Management.  He was then assigned to Infantry Weapons Systems, Marine Corps Systems Command (MCSC) in Quantico, Virginia.  In 2003, he was assigned as the Team Lead for the Force Protection/Non-Lethal Systems Team and in 2005 he was selected to become the Ground Based Air Defense Team Lead.

In July 2010, Col McDaniel reported to the Marine Corps Operation Test and Evaluation Activity to serve as the MAGTF C4ISR Division Head.  At MCOTEA, he led the successful execution of multiple Operational Test events and earned his Level III certification in Test and Evaluation.