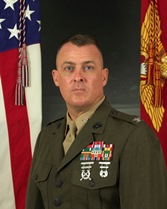 Refunds will be issued to those who have already paid. Please watch the website for the new date.

On Thursday, February 13, 2014 Quantico-Potomac Chapter will host a luncheon at The Clubs at Quantico. The Guest Speaker will be BGen (S) Michael S. Groen, Director, Marine Corps Intelligence, HQMC. Registration will open at 11:00 AM with Lunch at 11:30 AM. BGen(S) Groen will speak at 12:00 Noon followed by a short Q&A session. The luncheon will conclude at 1:00 PM.

Brigadier General (Select) Michael S. Groen is a 1986 graduate of Calvin College in Grand Rapids, MI. As a junior officer, he served with Marine Air Group (MAG)-39 in Camp Pendleton, MAG-36 in Okinawa, and with the 31st Marine Expeditionary Unit (MEU). His early experience included deployments to Central America and across the Western Pacific.

Captain Groen attended the Naval Postgraduate School (NPS) in Monterey, California, graduating with Masters of Science degrees in Electrical Engineering and Applied Physics, which led to assignment as a Signals Intelligence and Electronic Warfare development and acquisition program officer at Marine Corps Systems Command. He attended the Marine Air-Ground Task Force Intelligence Officer Course and was a distinguished graduate of the Marine Corps Command and Staff College.

In 2000, Major Groen reported for duty with the 1st Marine Division as the Deputy G-2. During Operation Iraqi Freedom I Lieutenant Col Groen participated in combat operations as the Division’s intelligence planner. Lieutenant Colonel Groen was further designated as the G-2 for Task Force Tripoli, operating in north-central Iraq. He returned to Iraq with the 1st Marine Division as the Division G-2, where he was a principal in the redesign of Marine Intelligence with a refocus on improving support to regimental and battalion level operations through the creation of the Tactical Fusion Center.

In 2004, Lieutenant Colonel Groen was reassigned to US European Command where he served as the Chief of Intelligence Planning for Europe and Africa. There, he planned intelligence operations in the Balkans, Northern Iraq, Central Africa, and the Trans-Sahara region. He was instrumental in transitioning intelligence processes into the newly formed Joint Intelligence Operations Center (JIOC).

In 2006 Lieutenant Colonel Groen assumed command of 3d Radio Battalion, Marine Corps Base Hawaii. During this time, the Battalion conducted its first deployment to the Southern Philippines in support of Operation Enduring Freedom-Philippines and continued its support to the 31st MEU. After command, he reported to the College of Naval Warfare in Newport, Rhode Island. While there, he was selected as the Marine Fellow in the Stockdale Group, assisting the U.S. Navy program to develop joint and operational leaders. Promoted to Colonel, he graduated with distinction in June 2008.

In August 2010, Colonel Groen returned to Quantico, Virginia to serve under the Deputy Commandant for Combat Development and Integration. There, he led the Marine Corps’ Amphibious Capabilities Working Group, which reviewed naval relationships, doctrine, concepts, and capabilities. In that capacity, he also formed and served as the initial director of the ‘Ellis Group,’ refining concepts for naval power projection and expeditionary operations.

In 2012, Col Groen became the Director of the Marine Corps Strategic Initiatives Group (SIG), directly supporting the Commandant and senior leadership for institutional and operational issues of strategic importance. Selected for Brigadier General, he was reassigned as the Director of Marine Corps Intelligence in June of 2013.

Brigadier General (sel) Groen is married with three sons. His personal decorations include the Legion of Merit, the Bronze Star, the Defense Meritorious Service Medal, and the Combat Action Ribbon.