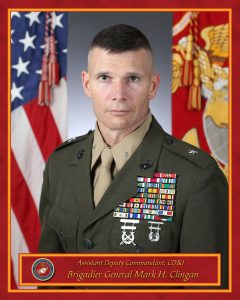 Brigadier General Clingan enlisted in the Marine Corps Reserve in 1989 and deployed to Operations DESERT SHIELD/STORM in 1990-91 with the 4th Civil Affairs Group.  He was commissioned in 1993 through the Naval Reserve Officer Training Corps program after graduating from the American University with a degree in International Studies.

His supporting establishment assignments include service as an instructor at The Basic School (TBS) 1997-2000, again as the Director of the Warfighting Instructor Group 2009-10, and a third time as the Commanding Officer 2016-18.