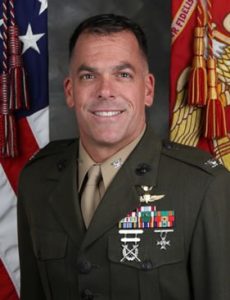 Colonel Robert O. Bailey was born in Fairfax, VA, in 1973 and grew up in the National Capital Region. He attended the United States Naval Academy where he earned a Bachelor of Science in Political Science and a commission in the United States Marine Corps in 1995.

Colonel Bailey is a distinguished graduate of the Eisenhower School where he earned a Master of Science in National Security and Resource Strategy. He is a Project Management Professional (PMP) and holds several DAWIA primary and subsidiary career field certifications, including Level III in Program Management; Level II in Systems Planning, Research, Development and Engineering; Level II in Test and Evaluation; and Level I in Production, Quality and Manufacturing.

Colonel Bailey is married to the former Ms. Carmen Fifer from Annapolis, MD, and they have two children.