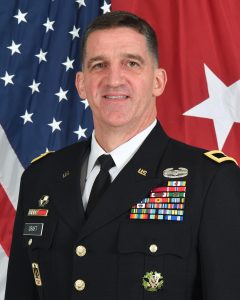 Brigadier General Paul G. Craft, a native of Piqua, Ohio, entered the Army in 1993, as a Second Lieutenant in the Signal Corps.  Brigadier General Craft currently serves as the Army’s 4th Chief of Cyber and Commandant of the U.S. Army Cyber School headquartered in Fort Gordon, Georgia, with schools in Fort Sill, Oklahoma, and NAS Pensacola-Corry Station, Florida.

He has been married for 27 years and has one daughter.