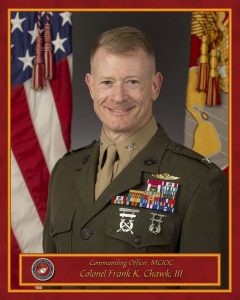 Colonel Frank Chawk is a Marine Corps intelligence officer, a Western Europe foreign area officer (FAO) and a Middle East regional affairs officer (RAO) via experience. He is also a MAGTF planner, an advanced Information Operations (IO) planner, and a foreign security force advisor. He received his Bachelor of Arts Degree in International Studies, Western Europe, from the University of Dayton and began his career as a ground intelligence officer.

His staff assignments include battalion intelligence officer (S2) with 3/5 and current intelligence officer for the US Navy’s 6th Fleet (N22) in Gaeta, Italy. As a Major, he served as a Signals Intelligence Collection Manager in the Central Command (CENTCOM) J2, was the Aide de Camp to the CENTCOM Commanding General, and served in the J2X (Human Intelligence) directorate. He deployed as the S3 future operations planner for Combat Logistics Regiment-2, Marine Expeditionary Brigade-Afghanistan (MEB-A) and served as the (G3) Plans Officer for 2nd Marine Logistics Group. As a Lieutenant Colonel, he deployed as the Deputy G2 for 2d Marine Division (Forward) in Afghanistan and served as the Regional Command (Southwest) / Task Force Leatherneck Liaison Officer to US Special Operations Forces at Bagram airfield. He served as a Branch head at HQMC Intelligence Department (I Dept) and completed a 6 month deployment as the Deputy J2 for the CJFLCC in Baghdad, Iraq. As a Colonel, he served as the Division Chief for Intelligence Operations Division at HQMC, I Dept.

He has earned Master’s degrees in Military Studies, Operational Studies, and Strategic Security Studies with a concentration in Counterterrorism. In addition to various campaign and personal awards, he was the 2010 recipient of the Navy League’s John A. Lejeune Leadership award.

Colonel Chawk and his wife have been married for more than 20 years and are the proud parents of two beautiful daughters.