On Thursday, February 21, 2019, AFCEA Quantico-Potomac will host a luncheon at The Clubs at Quantico. The Guest Speaker will be Col Douglas Lemott USMC.  Col Lemott is the Commanding Officer< Marine Corps Cyberspace Operations Group. 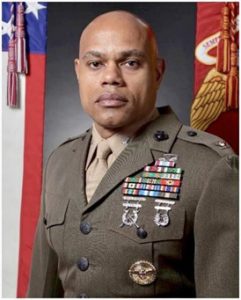 Colonel Lemott Jr. is a native of New Orleans, Louisiana. He graduated from the United States Naval Academy and was commissioned in 1995.

After completing The Basic School and Communications and Information Systems Officer Course in December 1996, he was assigned to Marine Wing Communications Squadron 28 and served as a Single Channel and Multi-Channel Radio Platoon Commander.

In June 1999, he was assigned to 7th Communication Battalion and served as Assistant Operations Officer, Commanding Officer, Company A, and Commanding Officer, Support Company. During this tour he served as Communications Detachment Commander for several exercises in the Pacific Command Area of Responsibility and was a finalist for the Alfred M. Gray Trophy for Outstanding Command and Control Systems Leadership. He then went on to earn a Master of Science Degree in Computer Science from Naval Post Graduate School in 2004 and

completed his utilization tour at Marine Corps Tactical Systems Support Activity where he served as a Branch Head and Program Manager.

In September 2007, he transitioned to serve as the Communications Officer for 15th Marine Expeditionary Unit and deployed to support Operation Iraqi Freedom. He was then selected to attend Marine Corps Command and Staff College and upon graduation was assigned to III Marine Expeditionary Force as the G-6 Operations Officer. During this tour he was assigned as an Individual Augment to serve as an Operational Planner for United States Forces – Iraq and led the establishment of an inter-agency planning team to facilitate and assist the Department of State in assuming the enduring mission in Iraq from the Department of Defense.  While assigned to III Marine Expeditionary Force, he was selected to command Support Battalion, Recruit Training Regiment, Marine Corps Recruit Depot, Parris Island, South Carolina. After a successful command tour, he attended the National War College and earned a Master of Science Degree in National Security Strategy in 2014.

In June 2014, he went on to serve as a Military Faculty Advisor at Marine Corps Command and Staff College,