On Friday, January 19, 2018, AFCEA Quantico-Potomac will hosted a luncheon at The Clubs at Quantico. The Guest Speaker was BGen Dmitri Henry.  BGen Henry is the Director of Intelligence, Headquarters Marine Corps..

BGen Henry was kind enough to share the transcipt from his remarks which can be access HERE. 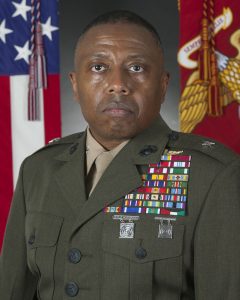 Brigadier General Henry enlisted in the Marine Corps in 1981 and attained the rank of SSgt. After completion of the Broadened Opportunity for Officer Selection Training (BOOST) he was selected for the Marine Enlisted Commissioning Education Program (MECEP) and graduated from Texas A&M University in 1988 and was commissioned a 2ndLt.

From May 1990-May 1993, 2ndLt Henry served at 2d Radio Bn and deployed with 8th Marines (DESERT SHIELD/DESERT STORM), 26th MEU SOC (PROVIDE PROMISE), and was OIC

In 1995, Captain Henry was subsequently assigned to the Navy Information Warfare Activity at the National Security Agency. In December 1997 he reported to 15th MEU SOC serving as S2A and then S2. After two MEU SOC deployments Major Henry reported to Marine Corps Command and Staff College in August 2000.

From 2001-2004, Major Henry served as the Commanding Officer, Co H, Marine Cryptologic Support Battalion, San Antonio, TX. After command, Major Henry reported to I MEF G2 where he participated in Operation Iraqi Freedom as the Deputy G2 and Intelligence Planner from August 2004-August 2006.

Brigadier General Henry was promoted to his current rank on 20 July 2017.