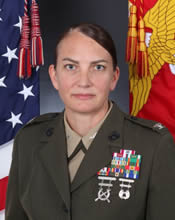 Colonel Goyette is a native of Muscoda, Wisconsin. She graduated from the University of Wisconsin-Madison and was commissioned via the Naval Reserve Officer Training Corps Program in 1993.

In 1994, Colonel Goyette was assigned to Communications Company, 3d Force Service Support Group in Okinawa as a Platoon Commander for the Data Communications Platoon and Multi-Channel Radio Platoon.

Colonel Goyette transferred to Marine Corps Air Station New River in May 1998 to serve as the Communications Platoon Commander for the Marine Wing Support Squadron-272. In May 1999, she returned to Okinawa as the G-6 Operations Officer, 3d Force Service Support Group. She spent the final year of that tour as the Staff Secretary/Protocol Officer.

In May 2002, Colonel Goyette was stationed at Marine Corps Logistics Base, Albany, Georgia, and assigned to Program Manager-Logistics Information Systems, Marine Corps Systems Command as the Operations Officer and Enterprise Systems Branch Head.

Colonel Goyette assumed command of Marine Corps Security Force Battalion Kings Bay, Georgia in June 2010.  She was then selected to attend the Naval War College in Newport, Rhode Island. Her follow-on assignment was with the Joint Staff J6 at the Pentagon. In July 2015, Colonel Goyette transferred to Marine Corps Air Station Cherry Point where she served as the 2nd Marine Aircraft Wing Assistant Chief of Staff G-6.

Colonel Goyette graduated with distinction from the Naval War College earning a Master of Arts Degree in National Security and Strategic Studies and has a Master of Science Degree in Organizational Leadership from Norwich University. She is also a graduate of Communication Information Systems Officer Refresher Course, Basic Communications Officer’s Course and The Basic School.

Colonel Goyette is married to Curtis Goyette, a retired Marine Corps LDO Major, and they have two children, Heather and Ethan.