On Jan 21, 2016 AFCEA Quantico-Potomac hosted a luncheon at the Clubs at Quantico.  Col (sel) Curtis Carlin, Division Chief for Vision & Strategy. Col (sel) Carlin was our guest speaker and gave us a comprehensive look at the future of Marine Corps Command and Control and the challenges the Marine Corps faces.

Pictures of the Event 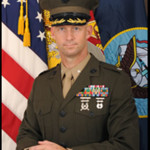 Lieutenant Colonel Curtis Carlin is a native of Brandon, Florida.  He graduated from the University of Florida with a Bachelor’s of Science in Marketing in 1993 and was soon commissioned a 2nd Lieutenant. After completing The Basic School and Communications Officer School, 2nd Lieutenant Carlin was ordered to 3rd Marine Division in Okinawa, Japan.  During his tour, he served with 4th Marine Regiment as the S-6A, Communication Platoon commander.  In 1996, 1st Lieutenant Carlin was transferred to Combat Assault Battalion and served as the S-6 Communications Officer. Later, as a newly-promoted Captain, he served as the Headquarters and Service Company commander.

After transferring to Quantico in 1998 and completing a year at Command and Control Systems Course, Captain Carlin spent three years at the Marine Corps Combat Development Command as a Requirements Officer supporting the Joint Capabilities Integration Development System. After being selected for Major in 2002, he was transferred back to Okinawa, Japan for a three-year tour with the 1st Marine Aircraft Wing. Major Carlin first spent one year as the Deputy Assistant Chief of Staff G-6 and then one year as the Staff Secretary for the Commanding General. During his final year on Okinawa, Major Carlin served as the S-3 Operations Officer for Marine Wing Communications Squadron-18.

In July 2005, Major Carlin went back to Quantico, as he was selected to attend the Marine Corps Command and Staff College. There he completed multiple courses of study and earned a Masters in Military Science. Major Carlin transferred to Headquarters United States Central Command, Macdill Air Force Base in Tampa, Florida.  During this tour, he served three years in the J-3 Operations Directorate as a strategic planner and plans branch chief for the J-3 Strategic Movements Center.  During this high-tempo assignment he was promoted to Lieutenant Colonel. After attending the Joint Forces Staff College in Norfolk, Virginia, Lieutenant Colonel Carlin received designation as a Joint Specialty Officer.