On 25 Feb, 2016, Valerie Mosqueira, Assistant Commander for Contracts, Marine Corps Systems Command, hosted a panel of Contracting Officers.  This was a great event as Val and her team reviewed the good and the bad things they have seen in RFP responses and offered tips to businesses seeking to increase their chances of success with the government.  This also was an opportunity for two-way dialog with industry expertise helping the government in their solicitation and contracting processes.

Thanks so much to Val and her team. 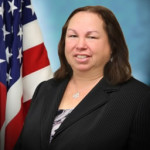 Ms. Valerie Mosqueira has served as the Assistant Commander for Contracts at the Marine Corps Systems Command (MCSC) since January 2012.  In this position she is the recognized authority and advisor to the Commander and Executive Director of MCSC.  She is responsible for all planning, directing and coordinating contractual and procurement policy actions involved in supporting sophisticated and technologically advanced systems and acquisition programs to ensure that mission responsibilities of the Command are achieved with an annual average execution budget of $4 billion.  She serves as the competition advocate, senior contracting officer with unlimited authority to obligate the Marine Corps to a specific course of action and competency director for the contracting competency workforce of over 200 contracting specialists.

Prior to her current position Ms. Mosqueira was the Assistant Program Executive Officer (PEO) for Contracts for PEO Land Systems (October 2007 – Dec 2011).  She was part of the team that established the PEO and served as the senior Contracting Officer and advisor with unlimited authority for nine ACAT I and II programs with a portfolio value of $6.3B across the FYDP.

Prior to this assignment, she was the Assistant Program Manager for Contracts for the Marine Air/Ground Task Force Communications, Command and Control Programs from December 2003 through September 2007.  She has served as a contracting officer on various USMC programs (2001 – 2003).  Spent twelve years as a contract specialist at the Naval Sea Systems Command and seven years at the Naval Air Systems Command as a negotiator on various programs.

Ms. Mosqueira holds a degree in Sociology from Frostburg State College in Frostburg, Maryland.  She is a member of the Defense Acquisition Community, DAWIA Level III certified in Contracting, Level I in Program Management and Business Financial Management.  She is an active member in NDIA and NCMA.

She received the Department of the Navy Meritorious Civilian Service Award (2012).

She and her husband of 24 years, Willy, have four children Ursula, Bruno, Michael and Tony and four grandchildren, Rafael, Tyler, Kaitlyn and Monica.  They reside in Woodbridge, Virginia.