On 23 July 2015 at the Clubs at Quantico, Mr. Jim Smerchansky, Executive Director, Marine Corps Systems Command, gave on his command followed by a mixer.  The brief was very informative and it was an extremely profitable interchange between government and industry as Mr. Smerchansky fielded and answered very challenging questions.  Thanks to Mr. Smerchansky and the great attendance for a very successful event.

Pictures of the Mixer can be viewed here:  Mixer Photos 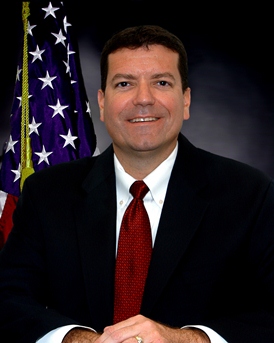 Mr. Smerchansky was appointed to the Senior Executive Service in August 2006 and is Executive Director, Marine Corps Systems Command.  In this position, he serves as the senior civilian official responsible for leading and directing daily business operations for the Command.

Prior to reporting to Marine Corps Systems Command, Mr. Smerchansky served as the Director for Above Water Sensor and the Director of Technology Development and Transition in Program Executive Officer, Integrated Warfare Systems.

He began his career at the Naval Sea Combat Systems Engineering Station in Norfolk, Va., as an in-service engineer on Submarine Combat Systems. In 1989, he transferred to the Naval Sea Systems Command headquarters in Washington, D.C. At NAVSEA he held various engineering and program management positions within the Submarine Combat Systems community including Chief Engineer for submarine sonar.  In 1997, Mr. Smerchansky became the manager of the Towed Acoustics Systems Program responsible for life-cycle management of all submarine-towed array and towed array handling systems. As a result of his efforts to advance towed array reliability through the use of next generation technology, Mr. Smerchansky was awarded the Navy Meritorious Civilian Service Award.

In 2001, he was assigned as the Deputy Program Manager, Strategic and Attack Submarines. He was charged with the support and modernization of the SSN688/SSN21/SSBN726 class submarines to meet the Navy missions of the 21st Century.

From 2002 – 2004, Mr. Smerchansky was the science and technology advisor to the Commander, U.S. Pacific Fleet in Pearl Harbor, Hawaii, where he assisted and advised the Commander in the identification of technologies having a critical impact on combat readiness. He was responsible for leveraging the DoN S&T community to provide rapid technology insertions, long-term investment strategy and surge capability in support of high priority fleet issues. In recognition of his long-lasting contributions to the operating forces in the Pacific, he was awarded the Navy Superior Civilian Service Award.

Upon returning to Washington, D.C., Mr. Smerchansky became the Deputy Executive Director for Undersea Technology at the Naval Sea Systems Command. He was responsible for identifying opportunities to merge evolving technologies into the development of ongoing or planned programs, and to assess and implement initiatives for applications of technological innovations into existing fleet operational platforms.

Mr. Smerchansky holds a Bachelor of Engineering Degree in Electrical Engineering from Youngstown State University and a Masters in Engineering Management from Old Dominion University.