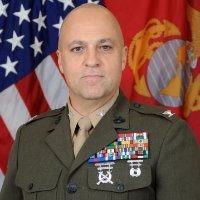 The event was a model for government/industry interaction with Col Breazile bringing his entire staff to the event and introducing the capabilities and requirements that each was focusing upon as well as articulating USMC requirements to industry.

Also, at this event, Mike Warlick was on hand to swear in the 2015 Chapter Officers.

The brief for this event is enclosed and select photos are included. 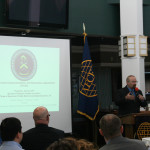 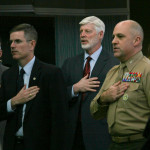 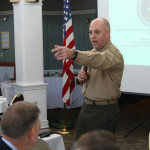 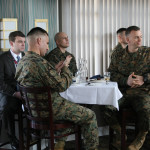 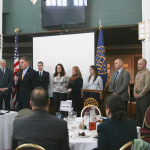 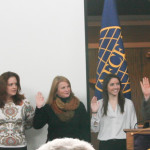 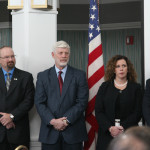 Prior to this assignment he served as the Commanding Officer, Marine Corps Communication-Electronics School, 29 Palms, CA.

He began his enlisted service as a Marine Corps Reserve Anti-Tank Assault Man (TOW Gunner) and attained the rank of Corporal when he was accepted to the Platoon Leaders Class commissioning program. As a Marine Corps Officer, Colonel Breazile was trained in communications and has served 27 years as a Communications Officer. He has commanded at the platoon, company, battalion & group levels.

Colonel Breazile has earned a Masters of Military Art and Science (MMAS) Degree from the Army Command & General Staff College, as well as a Master of Arts (MA) Degree in Information Management from Webster University. He has also attained a Master of Science (MS) Degree in National Resource Strategy from the Industrial College of the Armed Forces (ICAF).

Colonel Breazile is married to the former Marcella Heid of Stillwater, Oklahoma and they have four grown children (Christopher, Stephanie Cane, Benjamin, and Cecilia) and one grandchild (Genesis Cane).