Join us on 21 August 2014 for a luncheon with the new Commanding Officer of the Marine Corps Network Operations and Security Center (MCNOSC), Col William Berris, USMC. 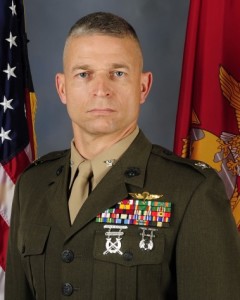 Colonel Berris was born in Fort Bragg, North Carolina and attended high school in Hobart, Indiana.  He enlisted in the Coast Guard in April 1984.  He was commissioned a Marine Corps Second Lieutenant in April 1992 following completion of Officer Candidates School.

Colonel Berris is married to the former Melissa Heppe of Kalamazoo, Michigan.  They have four children: Sophia, Audrey, Lillian, and Willie.