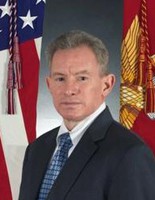 Mr. Bible was appointed to the Senior Executive Service in March 2013, and currently serves as the Chief Technology Advisor for U.S. Marine Corps Headquarters. In this capacity, Mr. Bible serves as technical advisor to the Commandant of the Marine Corps for all matters pertaining to identification and validation of IT requirements, and lead for continuing assessment and identification of promising emerging C4 and information technologies for exploitation and application in the war fighting and business domains.

Prior to his appointment to Senior Executive Service, Mr. Bible served as the Assistant Program Executive Officer (Engineering) for PEO Enterprise Information Systems (EIS) as assigned by the Space and Naval Warfare Systems Command (SPAWAR) from 2009-2013. In this role, Mr. Bible led the engineering competency for PEO EIS, and provided technical leadership to a portfolio comprising over $2 billion of information technology projects and programs designed to enable common business processes and provide standard information technology capabilities to the Department of Navy.

Prior to joining the SPAWAR headquarters organization in 2009, Mr. Bible headed the Networks Engineering Division of the SPAWAR Systems Center Atlantic in Charleston, S.C., where he held the East Coast technical warrant for U.S. Navy Networks, and managed an organization comprising over 150 government employees executing over $150 million in total obligation authority. Mr. Bible focused engineering efforts on identifying impacts of net-centric software design patterns on core communications and networking capability afloat and ashore. In 2008, he was detailed as the Technical Director to support the stand-up of the Next Generation Enterprise Network (NGEN) System Program Office (SPO) at Navy Headquarters.

Mr. Bible served as the program manager for the Non-Obvious Relationships Awareness (NORA) initiative in the initial OSD-NII Horizontal Fusion portfolio in 2003. He also served as the Chief Engineer for the Fleet Environmental Information Management System (EIMS)/Protective Measures Assessment Protocol (PMAP) program, which was awarded the Chief of Naval Operations (CNO) and Secretary of the Navy (SECNAV) Environmental Team Awards in 2008.

Mr. Bible began his nearly 28 years of civilian service in 1985 at the former Charleston Naval Shipyard, where he rose to be a nuclear qualified engineering supervisor for three engineering branches. His leadership in resolving technical and regulatory issues surrounding hazardous and radioactive waste streams contributed substantively to the successful operational closure of the facility resulting from the 1993 Base Realignment and Closure (BRAC) decisions.