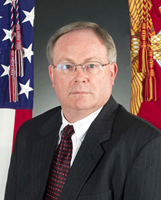 On Wednesday, February 6, 2013, the Deputy Director, C4/Deputy Chief Information Officer of the Marine Corps, Mr. Robert Jack II, was our guest at the Clubs at Quantico for an AFCEA Luncheon. The luncheon was one of the best attended of recent luncheons.

Mr. Jack was appointed to the Senior Executive Service in 2005 with 26 years of federal civilian service and six years of active duty with the U. S. Air Force. He entered the Air Force Reserve in July 1982, retiring from the Reserve in December 2000 with more than 24 years of service in various assignments at Wright-Patterson AFB, Ohio; Scott AFB, Ill.; and Seymour Johnson AFB, N.C.

In April 1994, he was selected for a career broadening assignment at Headquarters Air Force Command, Control, Communications and Computer Agency at Scott AFB, Ill., under the communication-computer career program. He transferred to Headquarters Air Combat Command at Langley AFB, Va., in 1997, serving for six years in a variety of assignments culminating as Chief, Systems Integration Division, and Technical Director, Directorate of Communications and Information Systems.

He is a member of the Armed Forces Communications and Electronics Association and the National Defense Industrial Association.