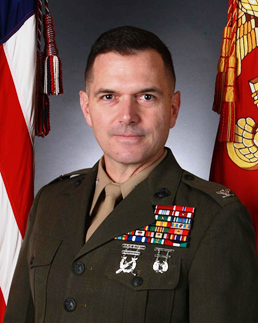 On Thursday, March 7, 2013, the Commanding Officer, Marine Corps Network Operations and Security Center, Col David McMorries, USMC, was our guest at the Clubs at Quantico for an AFCEA Luncheon. Col McMorries’ brief on the MCNOSC was excellent and was well received by another large audience.

His presentation can be downloaded by clicking on this link: AFCEA MCNOSC Brief.

Colonel McMorries’ military education includes the Basic School (1988), Basic Communications Officer’s Course (1988), Command and Control Systems Course (1995), and in June 2000 he graduated from the Naval Postgraduate School with a Masters of Science in Information Technology Management.