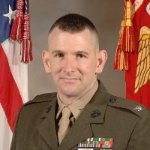 Colonel Peter C. Reddy was commissioned in May 1984, graduating from the University of Virginia with a Bachelor of Science in Aerospace Engineering. In 1990, he received a Master of Science in Systems Engineering (Electronic Warfare) (with distinction) from theNavalPostgraduateSchool,Monterey,California. He received a Masters of Strategic Studies as a Distinguished Graduate from the Marine Corps War College in June 2004.  He received a Master’s Certificate in Information Systems and Operations from theNavalPostgraduateSchoolin September 2009.  Colonel Reddy also graduated from the Air Command andStaffCollegeand theMarineCorpsWarCollege.

Colonel Reddy’s significant operational assignments as an air control officer include service as the Commanding Officer of Marine Air Control Squadron 4, MCAS Futenma, Okinawa, Japan from June 2001 to December 2002, deploying with his squadron to Afghanistan and Uzbekistan in support of Operation ENDURING FREEDOM; and Commanding Officer of Marine Air Control Group 38 from December 2007 to November 2009, deploying with the Group to Iraq from January 2008 to January 2009 in support of Operation IRAQI FREEDOM.

Colonel Reddy is certified as Level III in the Defense Acquisition Program Management Career Field and as a Project Management Professional.