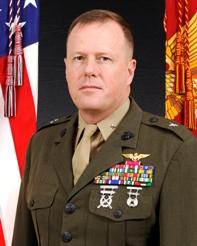 On Thursday, August 23, 2012, the Commanding General of the Marine Corps Warfighting Lab, BGen Mark Wise, USMC, was our guest at the Clubs at Quantico for an AFCEA Luncheon. He talked about the current efforts underway at the Warfighing Lab.  The presentation from his talk is not available for viewing or download.

BGen Wise is currently assigned as the Commanding General of the Marine Corps Warfighting Laboratory, Quantico, VA. He was born in Amarillo, Texas and is a graduate of the University of Washington in Seattle, WA and the Naval War College in Newport, RI.

BGen Wise’s staff tours include: Marine Aircraft Group 31 and Marine Aircraft Group 12. In 1999 he was assigned to Headquarters Marine Corps as the F/A-18 Requirements Officer, TACAIR Budget Officer and the Aide de Camp to the Deputy Commandant for Marine Aviation. In 2009 he deployed to Kabul, Afghanistan as the Executive Officer to the Deputy Chief of Staff for Operations at Headquarters, International Security Assistance Force. In 2010 BGen Wise returned to Headquarters Marine Corps as the Deputy Branch Head for Aviation Plans, Policies, Budget and Joint Matters where he remained until 2011.