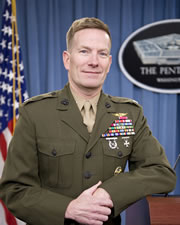 A Quantico-Potomac AFCEA luncheon was held on August 17, 2011 at 1100 at the Clubs at Quantico where we looked at Media Operations two angles.  The first angle is from the role DOD Public Affairs in addressing topics that range from Warfighting to issues within the DOD that are topical to the public and media in general.  The second angle is how information technology is utilized to support media reporting, whether it be from the Pentagon or from the battlefield.

Col Lapan did not use slides, so no presentation is available.

Col. Lapan enlisted in the Marine Corps in 1980 and served as an air traffic controller and UC-12B crew chief before being selected for the Enlisted Commissioning Program.  He was commissioned a second lieutenant of Marines in April 1983.

Col. Lapan transferred to the Marine Corps Reserve in 1987.  He was assigned to Marine Corps Air Station El Toro (CA), working in airfield operations, and was recalled to active duty during Operation Desert Storm.

In 1993, he resumed his undergraduate studies and graduated with honors from the Pennsylvania State University with a B.A. in Journalism and Humanities.  He also spent two years as assistant press secretary for the Pennsylvania Department of Public Welfare, the largest agency in Pennsylvania state government.

In 1996, as a Reserve officer, Col. Lapan was assigned to the Armed Forces Inaugural Committee, serving as public affairs liaison to the Joint Congressional Committee on Inaugural Ceremonies for the 1997 Presidential Inauguration.

Returning to full-time active duty, he was assigned to Headquarters, U.S. Marine Corps, where he served as head of the Media and Plans branches, from 1997 – 2000.

From 2000 – 2003, Col. Lapan served as press officer in the Office of the Assistant Secretary of Defense for Public Affairs, The Pentagon, where, among other duties, he was Public Affairs liaison to U.S. Central Command during Operations Enduring Freedom and Iraqi Freedom.