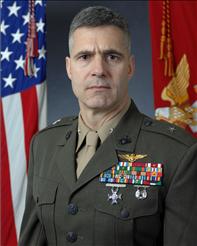 On Thursday, 31 March 2011, the AFCEA Quantico-Potomac Chapter held a luncheon at The Clubs at Quantico.

Unfortunately LtGen Flynn was unable to speak at the luncheon on March 31. The replacement speaker was BGen John W. Bullard, Jr., Deputy Commanding General, Marine Corps Combat Development Command. BGen Bullard presented an update on Marine Corps Cyberspace. A copy of his brief can be downloaded from the link at the end of this post.

Brigadier General Bullard is a 1982 graduate of Virginia Tech with a Bachelor of Science Degree in Financial Management. He was commissioned a Second Lieutenant from Officers Candidate School. Upon completion of Basic School, he reported to NAS Pensacola for flight training and was designated a Naval Aviator in January 1985. Follow on CH-46 training was conducted at HMT-204 at MCAS New River, North Carolina

Brigadier General Bullard has served in the following operational squadrons: HMM-263, HMM-161 and HMM-774, and was the Commanding Officer of HMM-161 from May 2000 to December 2001. Deployments include 26th and 24th Marine Amphibious Units (Special Operations Capable) aboard the USS Guadalcanal where he participated in operations against Libya in 1986 and operation EARNST WILL involving the re-flagging of Kuwaiti tankers in 1987. From 1989 to 1993, he was assigned to Marine Aviation Weapons and Tactics Squadron 1 where he served as CH-46 division head and attached to HMM-161 for DESERT SHIELD and HMM-774 for DESERT STORM. In 1994, he deployed on USS Essex with 13th Marine Expeditionary Unit (SOC) where he supported UN sanctions enforcement against Iraq and conducted operation UNITED SHIELD, UN withdrawal from Somalia. As Commanding Officer of HMM-161, he deployed on USS Tarawa as the Aviation Combat Element for 13th MEU (SOC) and participated in Humanitarian Assistance Operations in East Timor and DETERMINED RESPONSE, USS Cole recovery in Yemen. Upon completion of command, he was assigned as Executive Officer of Marine Aircraft Group 16.

His most recent operational assignment was the Commanding Officer of 11th Marine Expeditionary Unit from May 2005 to June 2008. He conducted two deployments on USS Peleliu and USS Tarawa to the US Central Command AO in support of operations IRAQI FREEDOM & ENDURING FREEDOM and participated in hurricane relief efforts for JTF Katrina and Cyclone Sidr relief efforts in Bangladesh during SEA ANGEL II.

His major staff tours include Headquarters Marine Corps in the Aviation Department’s Plans, Policies, Joint Doctrine, and Budget Branch where he served as congressional matters and budget Officer. Additionally, he served as Aide-de-Camp to Deputy Commandant for Marine Aviation. He was assigned to J5-Plans at US Central Command and deployed to the forward headquarters in support of operations IRAQI FREEDOM & ENDURING FREEDOM. His most recent staff assignment was Branch Head of Marine Aviation Weapons Systems Requirements Branch for Headquarters Marine Corps Aviation Department.

He earned a Masters of Business Administration from Webster University (1992), attended the Marine Corps Command and Staff College (1997), and received a Masters in Military Strategy from the Air Force War College (2003).