Some pictures from the event: 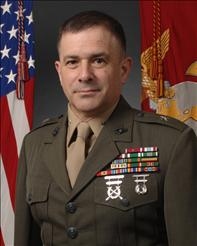 Brigadier General Allen earned a M.B.A. from Oklahoma City University and a M.S. in National Resource Strategy from the Industrial College of the Armed Forces, National Defense University. He also attended The Basic School, Advanced Communications Officers’ Course, and the Marine Corps Command and Staff College.