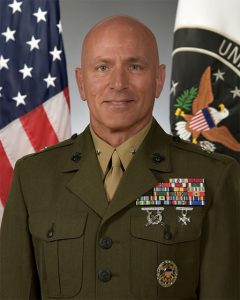 BGen Matos is a native of Springfield, Virginia. After graduating from Virginia Tech he attended the Marine Corps Officer Candidate Course where he received his commission as a Second Lieutenant.

Staff assignments for BGen Matos include Ground Standards Branch at Training and Education Command, project officer for satellite systems at Marine Corps Systems Command, Director of Communication School where he oversaw training of all Marine Corps communication officers, and the Joint Staff, J-6 where he was the Division Chief for Cyber Requirements and Capabilities, Integration and Strategic Initiatives. He also served as Assistant Chief of Staff, Information Environment Division at Marine Forces Pacific where he integrated Operations in the Information Environment for the command. He is currently assigned as Director, J6 for U.S. Space Command.

BGen Matos attended the Basic Communication Officer Course and the Command and Control Systems Course and has earned numerous industry certifications regarding information technology and project management. He is a 2001 graduate of the Naval Postgraduate School in Monterey, California and Distinguished Graduate of the Industrial College of the Armed Forces (ICAF) in 2011.