On Friday, January 31 2020, AFCEA Quantico-Potomac will host a luncheon at The Clubs at Quantico. The Guest Speaker will be Col Ed Debish  Colonel Debish is the Commanding Officer, Marine Corps Cyberspace Operations Group (MCCOG). 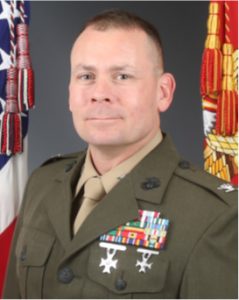 Colonel Debish was commissioned a second lieutenant after graduating from the University of Oklahoma in August 1994. After completing the Basic School in 1995 and the Basic Communications Officers Course in 1996, he served as the Operational Communications platoon commander and S-6 officer for Marine Air Control Squadron 1, Marine Air Control Group 38, 3rd Marine Aircraft Wing, at Camp Pendleton, California, from October 1995 to December 1998. During this tour, he was promoted to captain.

From December 1998 to June 2002, he served as a Weapons Tactics Instructor and Communications Division Head at Marine Aviation Weapons Tactics Squadron 1 at MCAS Yuma, AZ.

From July 2002 to June 2005, he was assigned to the 1st Force Service Support Group, Camp Pendleton, California. He served as the Information Systems Management Officer in the G-6 section from July 2002 to December 2002. He served as the S-6 officer for Combat Service Support Battalion 18 during Operation IRAQI FREEDOM 1 from January to July 2003. He also served as the Executive Officer from August 2003 to May 2004 and Commanding Officer from June 2004 to June 2005 for Communications Company, 1st FSSG during Operation IRAQI FREEDOM 04-1 (February-September 2004). During this tour he was promoted to major.

From July 2005 to June 2008, Major Debish was assigned a joint duty assignment at the Joint Information Operations Warfare Command, US Strategic Command, at Lackland AFB, San Antonio, Texas. As an information operations planner, he deployed in support of Joint Task Force – Iraq to Operation IRAQI FREEDOM 06-2 from September to December 2006 and Operation IRAQI FREEDOM 07-2 from August to December 2007. In 2008, he attended and graduated the Joint and Combined Warfighting School at the Joint Force Staff College, Norfolk, Virginia.

From July 2008 to June 2009 Major Debish attended and graduated the Army’s Command and General Staff College in Fort Leavenworth, Kansas. During that time, he also earned a Master of Science in Administration from Central Michigan University.

From July 2009 to May 2012, Major Debish was assigned to Combat Development and Integration, HQMC where he served as capabilities and integrations officer and as the deputy branch head for Capabilities Branch, Command and Control Integration Division. During this tour he was promoted to lieutenant colonel.

From July 2014 to June 2015, Lieutenant Colonel Debish attended and graduated the Marine Corps War College, MCB Quantico, Virginia. During that time, he earned a Master of Strategic Studies.

From July 2016 to June 2018, Colonel Debish served as the AC/S G-6, 3rd Marine Aircraft Wing, at MCAS Miramar, California. During this tour he was promoted to colonel.

From June 2018 to May 2019, Colonel Debish served as the AC/S G-6, III Marine Expeditionary Force, at Camp Courtney, Okinawa, Japan.