On Thursday, March 29, 2018, AFCEA Quantico-Potomac will host a luncheon at The Clubs at Quantico. The Guest Speaker will be BGen Christian Wortman, USMC.  BGen Wortman is the Vice Chief of Naval Research and Commander, Marine Corps Warfighting Lab. 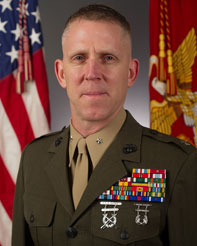 Brigadier General Wortman is a native of Warren, Pennsylvania, and a 1991 graduate of the United States Naval Academy.

As a company grade officer, he served in a variety of command and staff assignments in the 1st, 2nd, and 3rd Marine Divisions, as a rifle platoon commander, rifle and weapons company executive officer, rifle company commander, Battalion Landing Team assistant operations officer, and Light Armored Reconnaissance weapons company commander. While in these assignments, Wortman participated in numerous contingency and security force assistance missions in the Caribbean and Mediterranean Sea regions. Additionally, as a captain, he served as a writer in the Commandant’s Staff Group in support of the 31st Commandant of the Marine Corps and as a history instructor at the U.S. Naval Academy.

Wortman graduated with distinction from the Naval Academy with a bachelor of science in history. While a midshipman at the Naval Academy, he served as the brigade commander, the senior leadership position among the 4500 midshipmen. He was the honor graduate from his TBS Basic Officers Course class and received the Infantry Officer Course Wheeler Award for Infantry and Leadership Excellence. Wortman holds a Master of Arts in history from the University of Maryland, Master of Operational Studies from the Marine Corps University School of Advanced Warfighting, and Master of Strategic Studies from the National War College. He was a distinguished graduate from the National War College. Wortman was a Term Member of the Council on Foreign Relations from 1999 – 2004.