On 28 July, 2016, AFCEA Quantico-Potomac hosted a mixer with guest speaker Col Melvin Carter, Commander, Marine Corps Intelligence Activity.  The brief provided a great overview of the intelligence challenges that face the Marine Corps and how MCIA is evolving to meet current challenges.

<<PICTURES FROM THE MIXER>> 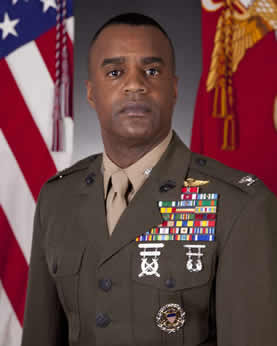 In July 1985, Private First Class Carter enlisted in the United States Marine Corps.  After graduating as the Honor Man from MCRD, Parris Island, he was meritoriously promoted to the rank of Lance Corporal and awarded the Signals Intelligence/Electronic Warfare (SIGINT/EW) Military Occupational Specialty (MOS).

While serving at 1st Radio Battalion, Kaneohe Bay, Hawaii from 1986 to 1989, Corporal Carter was awarded a NROTC Scholarship at Morehouse College in Atlanta, Ga.  As the Distinguished Honor Graduate from Morehouse College in 1992, MIDN 1/C Carter received the Vice Admiral Samuel L. Gravely Award for Leadership and was commissioned a Second Lieutenant in the United States Marine Corps.

Upon graduation from The Basic School (TBS) in 1993, Second Lieutenant Carter was awarded the SIGINT/EW MOS and ordered to 2nd Radio Battalion, Camp Lejeune, NC where he served as a Platoon Commander and a Staff Officer.  He completed his Camp Lejeune tour in 1996 supporting contingency operations in support of Operation JOINT ENDEAVOR as the 2nd Radio Battalion Detachment, Officer-in-Charge, 26th Marine Expeditionary Unit (Special Operation Capable).

In June of 1996, First Lieutenant Carter was promoted to the rank of Captain and ordered to the Joint Special Operations Command (JSOC), Fort Bragg, NC were he served as the PACOM/CENTCOM Branch Chief, J2 Operations.  While assigned to JSOC, Captain Carter participated in Operation BALKAN JUSTICE and Operation RESTORE FREEDOM.  After completing his tour at Fort Bragg, NC, he was ordered to Quantico, Va. to attend the Marine Corps Command and Control Systems Course.

In December of 2000, Captain Carter received orders to 13th Marine Expeditionary Unit (Special Operation Capable) as the Assistant Intelligence Officer (S-2A).  Shortly after September 11, 2001, he deployed to the CENTCOM AOR to serve as the Landing Force 5th Fleet Collection Manager in support of Operation ANACONDA.  Promoted in May of 2002, Major Carter received orders to I Marine Expeditionary Force (MEF) where he served as the G-2 Planner during Operation IRAQI FREEDOM.

In May of 2003, Major Carter was nominated by the Director of Intelligence (DIRINT) and selected by the Commandant of the Marine Corps (CMC) to serve as the Intelligence Officer/Platoon Commander for newly established Marine Corps Special Operation Command, Detachment One (MCSOCOM DET ONE).  During his assignment with MCSOCOM DET ONE, he deployed to Iraq as the Naval Special Warfare Task Group, Arabian Peninsula (NSWTG-AP), J2 during Operation IRAQI FREEDOM II.

In June of 2006, Major Carter returned to JSOC, Fort Bragg, N.C. where he served in various billets to include the Interagency Strategist/Planner, J3 Operations as well as the Task Force 714 Liaison Officer to Multi-National Division, Baghdad (MND-B).  He was selected for promotion to Lieutenant Colonel in October 2007.

In July of 2008, Lieutenant Colonel Carter was selected to serve as the Commanding Officer, 2d Radio Battalion, II Marine Expeditionary Force, Headquarters Group.  While in command, he deployed to Iraq as the TF Radio Battalion Commander.

In July of 2010, Lieutenant Colonel Carter relinquished command of 2d Radio Battalion and was ordered to the JFK School of Government, Harvard University where he served as the Commandant of the Marine Corps’ National Security Fellow.

In May 2012, Lieutenant Colonel Carter was ordered to the Defense Intelligence Agency (DIA) to serve as the Executive Officer for the Director before deploying to Afghanistan for 12 months to serve initially as the Combined Forces Special Operation Component Command-Afghanistan (CFSOCC-A) J2 and later the CJ2 for the Special Operation Joint Task Force-Afghanistan (SOJTF-A).  Colonel Carter was promoted to his current rank in September 2013, while assigned to the Central Intelligence Agency (CIA) as the Military Assistant (MA) to the Associate Director for Military Affairs (ADMA).