AFCEANS, in line with our plan to introduce you to the key C4 decision makers and knowledge base, we lined up BGen Stewart, USMC Intelligence Director (bio below) , as our guest speaker Wed, Sept 30. We were fortunate as this was the first opportunity for BGen Stewart to address industry since assuming his current role.  We received firsthand knowledge of BGen Stewart’s vision for the intelligence community and security in support of the Marine Corps. 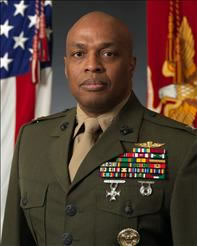