On Thursday, September 28, 2017, AFCEA Quantico-Potomac will host a luncheon at The Clubs at Quantico. The Guest Speaker will be Col Dave Burton who is the Program Manager, Intelligence Systems, Marine Corps Systems Command. 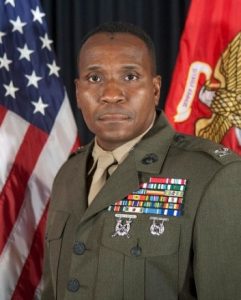 Colonel Dave W. Burton was born in Montego Bay, Jamaica and grew up in Washington, D.C. He attended local D.C public schools; graduated from Morehouse College with a bachelor’s of science degree in Physics and was commissioned a 2nd Lieutenant of Marines in 1989.  He served in the MAG-13, S-2 section in Yuma, AZ from 1991-1994.  During this period he deployed to Somalia, as part of the CENTCOM Intelligence Support Element (CISE), supporting U.S. Forces Somalia and UN operations in Somalia from May – October 1993.

Promoted to Captain in 1994 and transferred to Naval Space Command, Dahlgren, VA, he served as a member of a Space Support Team, teaching space systems and applications to deploying forces and providing hardware and software to access space based solutions.  Captain Burton then attended the Command and Control Systems Course in Quantico, VA, graduating in 1998.  During the summer of 1998, Captain Burton, served as a platoon commander at Officer Candidates School, graduating two platoons of Platoon Leaders Course.

Promoted to Major in Oct 1998, he transferred to U.S. Forces Korea, and served as chief of the Estimates Branch of the C/J-2 Directorate.  There he was responsible for developing the Peninsula Intelligence Estimates for the Korean theater.  Major Burton transferred to 1st Radio Battalion, Kaneohe Bay, HI in the summer of 2000 and served as the Operations Officer and then the Executive Officer.  He deployed with 1st Radio Battalion for Operation Iraqi Freedom in 2002.

Major Burton reported to the Marine Corps Command and Staff College earning a Masters of Military Studies degree, and after graduation in 2004 transferred to the Marine Corps Systems Command (MCSC).  Promoted to Lieutenant Colonel in Oct 2004, he served as the team lead for SIGINT systems, and later as the team lead for ground based Counter Radio-Controlled Improvised Explosive Device Electronic Warfare (CREW) systems.

Lieutenant Colonel Burton was selected as the Inspector-Instructor (I&I) of the Intelligence Support Battalion (ISB) in 2006.  After ISB, Lieutenant Colonel Burton was assigned to the Marine Corp Command and Staff College where he served as a military faculty advisor.  He was then selected as a Marine Corps Fellow and attended the Johns Hopkins University School of Advanced International Studies (SAIS) where he earned a Masters in International Public Policy.  Promoted to Colonel in July 2010, he was assigned to the II MEF Fwd in Aug 2010, and served as the Assistant Chief of Staff, Intelligence, Regional Command Southwest, in Afghanistan until March 2012.  In June 2012, Col Burton was assigned to Marine Forces Command and served as the Assistant Chief of Staff for Intelligence until June 2013. He then commanded Marine Corps Intelligence Schools from July 2013 to Aug 2015.  Col Burton is currently assigned as Program Manager Marine Intelligence, Marine Corps Systems Command.