On Thursday, June 17, 2021, AFCEA Quantico-Potomac will host a virtual Luncheon with BGen Lorna Mahlock, USMC.  BGen Lorna Mahlock is the Director, Information, Command, Control, Communications and Computers (IC4) and the Deputy Department of the Navy Chief Information Officer (CIO) of the Marine Corps. 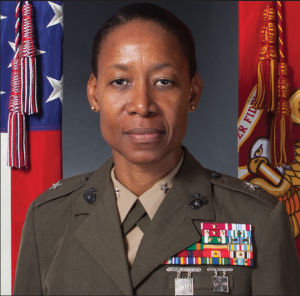 Born in Kingston, Jamaica, she immigrated to Brooklyn, New York and enlisted in the Marine Corps. She was selected for the Marine Corps Enlisted Commissioning Education Program, graduated from Marquette University and was commissioned in December 1991.